Discord is a free application initially made for various gaming communities to communicate via voice chat, text, and image and video sharing. People can make servers dedicated to specific topics such as Irish Overwatch. When Ramón “Hanafuda” Escolá joined a server dedicated to Overwatch-themed art, little did he know where that would take his career.

The Overwatch Art Discord Server is run by Anthony “Antwn” Salzarulo and Rose Leung. Anthony is the Graphic Designer for the Florida Mayhem, and Rose is one of the Designers for Team Ireland as well as Creative Lead for Armada. They created a challenge within the server to design a poster for your favourite Overwatch player.

Hanafuda designed one inspired by Sung-hyeon “Jjonak” Bang, superstar support player of the New York Excelsior. Humble as always, he said of it “It was also a project that I did in a couple of hours just at the very last moment of the challenge. I said like ‘I’ve got a little bit of time, let’s do something.’ They liked it so I’m glad I did it.” 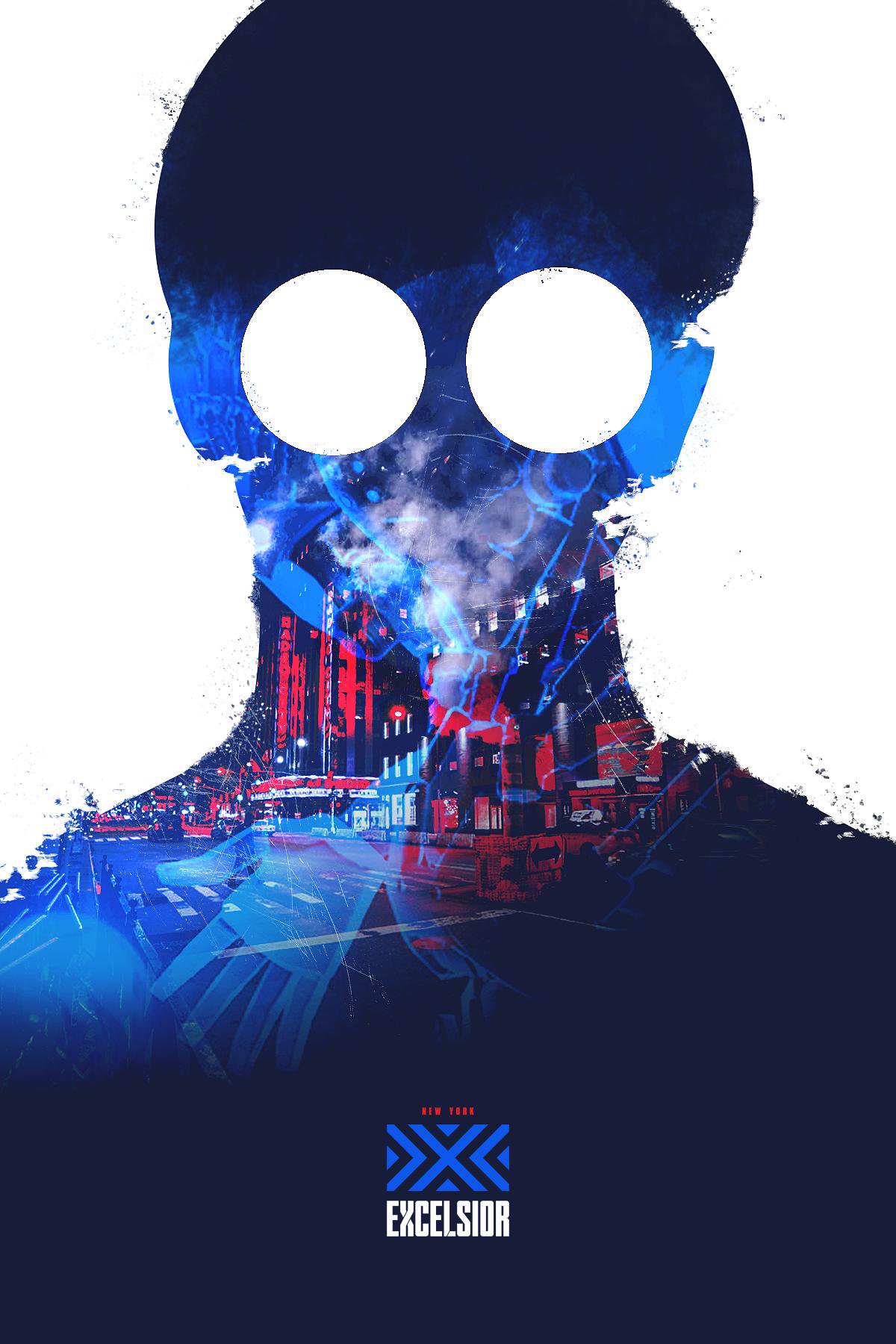 The Discord didn’t just like the poster – he won the weekly challenge for it. Then it started gaining traction when he posted it to Twitter and garnered over 1,100 likes, and over 160 retweets. That’s when Level99 Co., an esports creative agency, popped up in his direct messages wondering if he was interested in working for them.

While working for Level99 his team began designing for the Vancouver Titans, the Stage 1 Champions in the Overwatch League and runner-up in the Grand Finals. Hanafuda designed two standout posters for them; the first was for the Stage 3 Semi-final between the Titans and the Shanghai Dragons, and the second was when the Titans secured the top spot in the Pacific Division and the overall #1 seed in the playoffs. 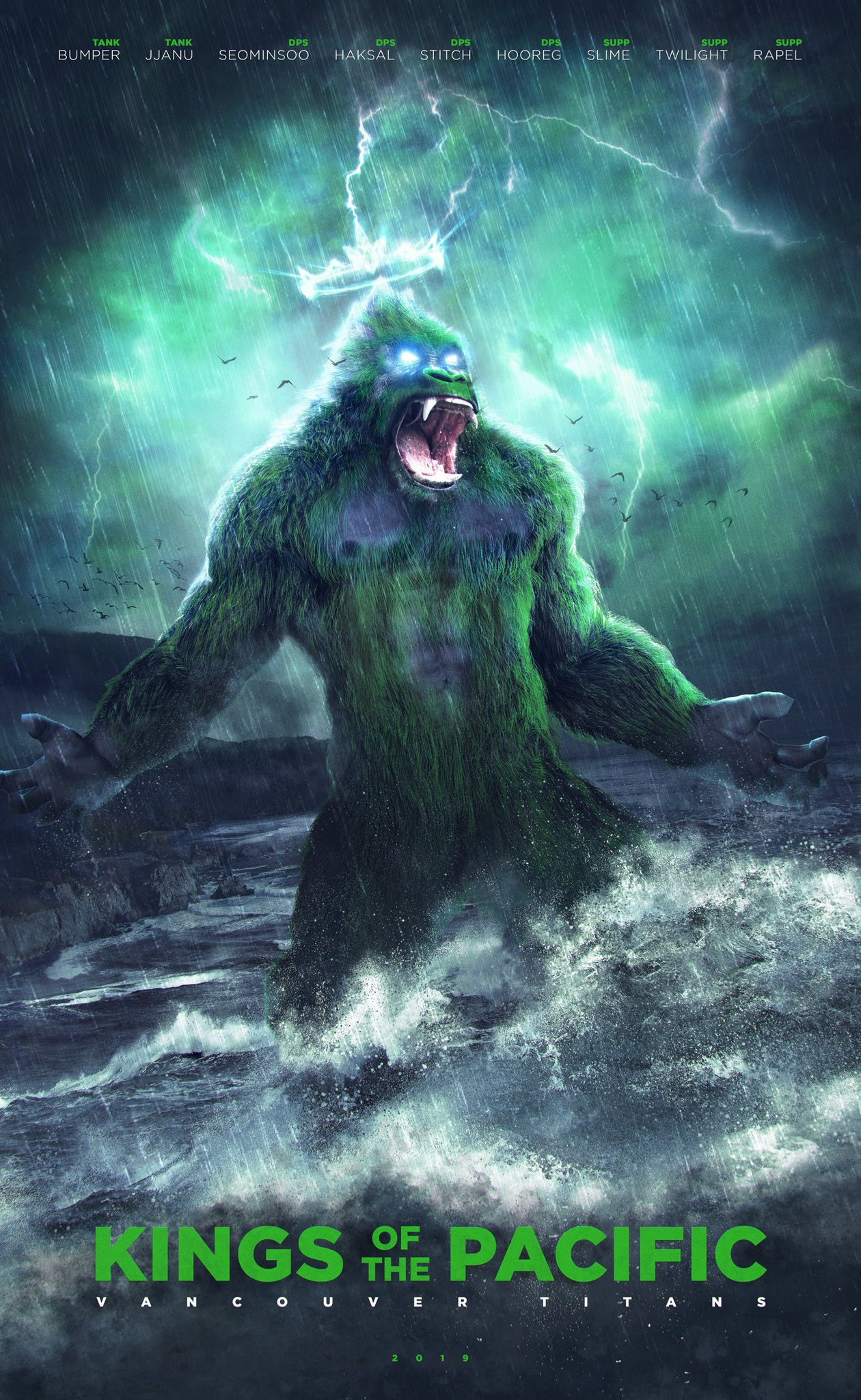 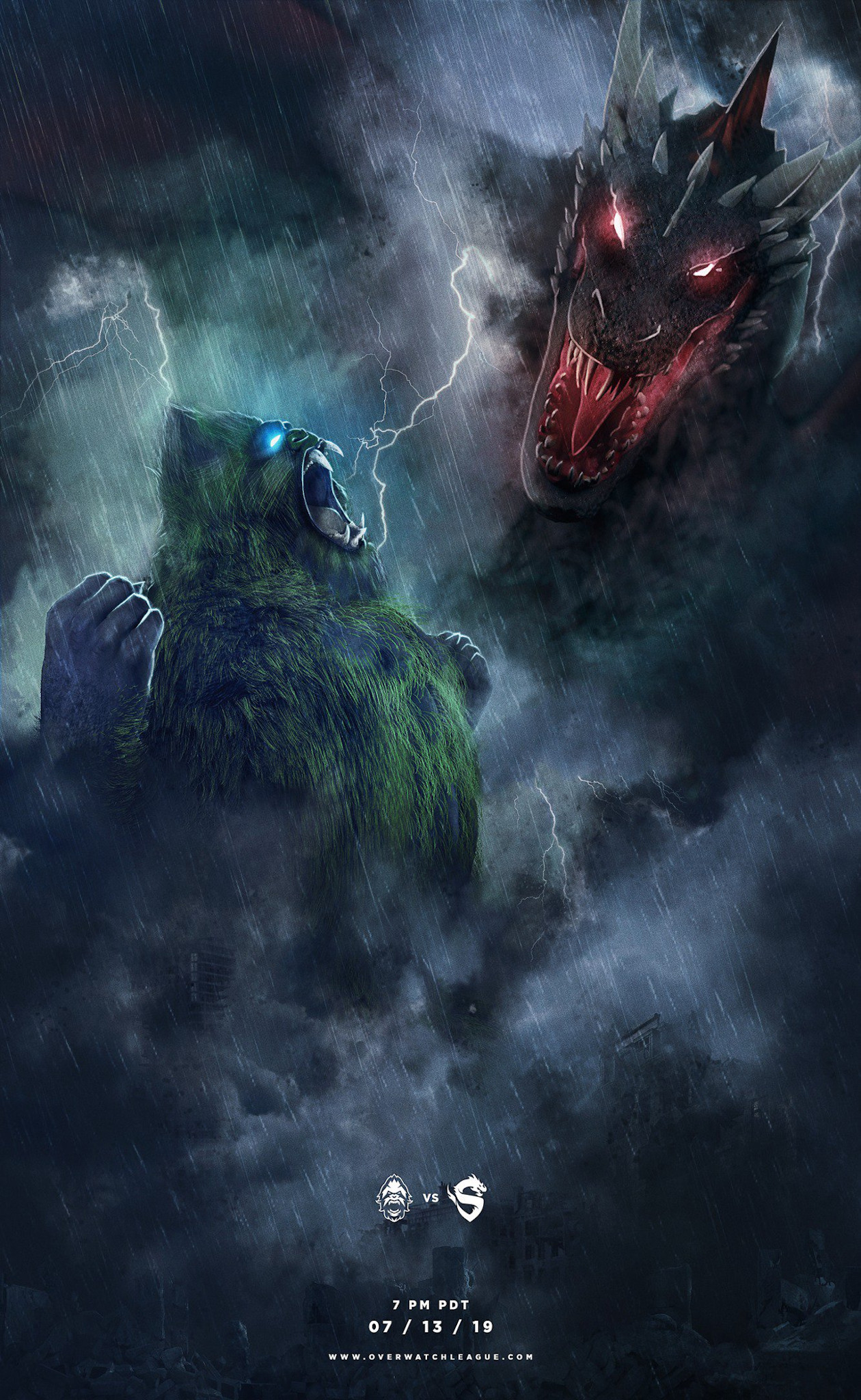 Going from the winner of a weekly Discord challenge and having no esports design experience to designing for one of the biggest Overwatch League teams is a true underdog story. But Hanafuda is no stranger in the field of Graphic Design. With 12 years experience on his back and multiple international design awards, he should definitely now be considered one of the ‘Big Dogs’ in the League. So with his experience, how did he end up designing the branding for Team Ireland for the upcoming Overwatch World Cup?

To answer this question, we need to look back to when Hanafuda was toying with the professional Overwatch scene. He first began playing on a team named Nevermore in the Open Division preceding Contenders, and while on this team he “saw other teams having nice logos or graphics and just for fun I decided to make some graphics for the team I was playing for.”

Thus began the foray into Overwatch graphic design. But it was a different team that assisted his attachment to Ireland; another Open Division team called Mutiny on which he played alongside Liam “Liam” O’Donnell (Team Ireland’s Main Tank) and Calum “Wheat” Comerford (Team Ireland’s Damage Player).

He had known other prominent members of the Irish Overwatch community before Mutiny, most notably Andy and Darwin. Interacting with them was the first time he really began enjoying playing Overwatch in a team setting and made friends through the game. With them as inspiration, he proposed the creation of Team Mutiny with Liam.

“I learned a lot from Andy and Liam and other Irish players, and [they] dedicated a lot of time to me helping me out with VOD reviews and trying to get better at the game. So I’ve always been really grateful for all the time spent because [they] are just nice and want to help people.”

When it came time for teams to register for the Overwatch World Cup, Ireland got the chance to participate after missing the previous two years. Hanafuda decided that if he could help in any way he gladly would.

Being from Spain, his first experience coming to Ireland was at the Dublin Games Festival. Despite not making the finals with the Mutiny Team, he decided to still travel with Liam and Wheat to meet his Irish friends in person. This trip helped to shape an image in his mind of what would become the branding for the Irish World Cup team.

Hanafuda described the iconic imagery of Ireland and the feeling of antiquity and historic culture as what defined how he made the branding. “Even if you don’t know much about Ireland, it’s always this place where nature and coasts and traditions, myths, and heroes and stuff like that pops into your head… it has a magical sense.”

He chose to go against the neo-sleek designs that many teams use and instead make something that feels more artisan. For inspiration for this aesthetic, he turned to American baseball branding and Irish whiskey packaging. Baseball teams like the New York Yankees opt for a design that feels more hand-drawn and personal, which differentiates the Irish Team from many other World Cup teams which have designs that follow a modern style. 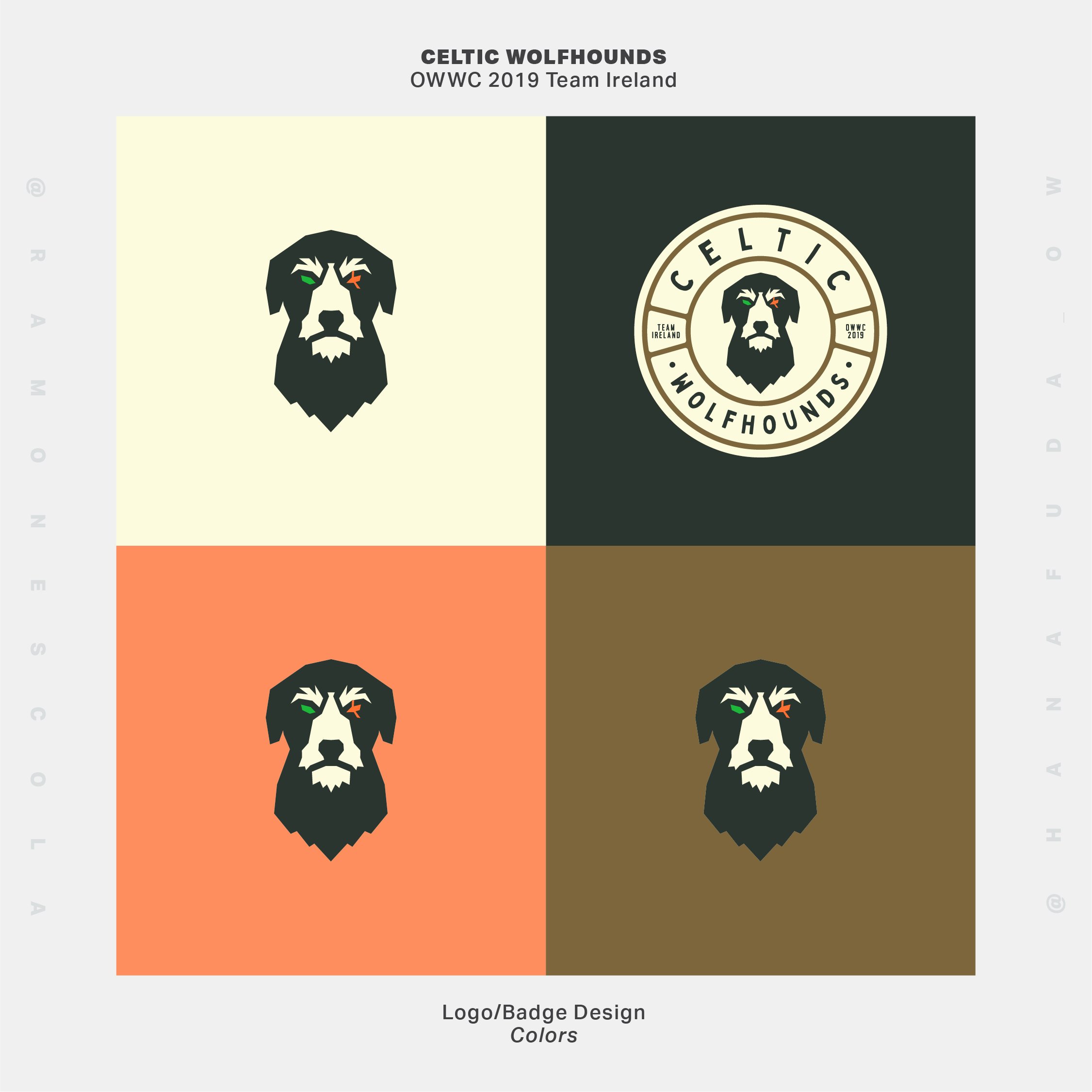 The decision to incorporate design ideas from whiskey labels was to capture a glimpse of what many perceive to be the ‘fun’ side of Ireland. The Irish are somewhat infamous for their drinking, even having Irish Stouts and Irish Whiskey categories named after them. Drawing from designs of bars and whiskey, Hanafuda was able to incorporate this aspect while creating a fitting brand that is unique for an Overwatch team.

The mascot of the Celtic Wolfhound came from Irish history and mythology. Originally the design team was considering some of the old Irish mythological heroes as inspiration, and while they found a few names that could have worked, Hanafuda said, “we decided that it would have been too niche, so even if it was a cool story and a cool name people wouldn’t have known about it.”
He was struck immediately by an image of the Irish Wolfhound, and the design team agreed on it because it would bring playfulness to the brand. The Wolfhound is a huge, intimidating dog but it’s also a nice, family dog that’s caring. These characteristics fit the team well, so the choice to brand around this was a no-brainer.

Confident in both the team and his design, Hanafuda believes Team Ireland can do the unthinkable. “Team Ireland [will win] 100%! There’s no doubt about it,” he laughed. “If Ireland doesn’t make it for any strange reason, I would go with the favourite which is South Korea just because it’s a safe bet. This time I think there are teams that could pull off some upsets of bigger teams, and one of them to be honest I think is Team Ireland. I think that they play well and have a little bit of luck on their side.” 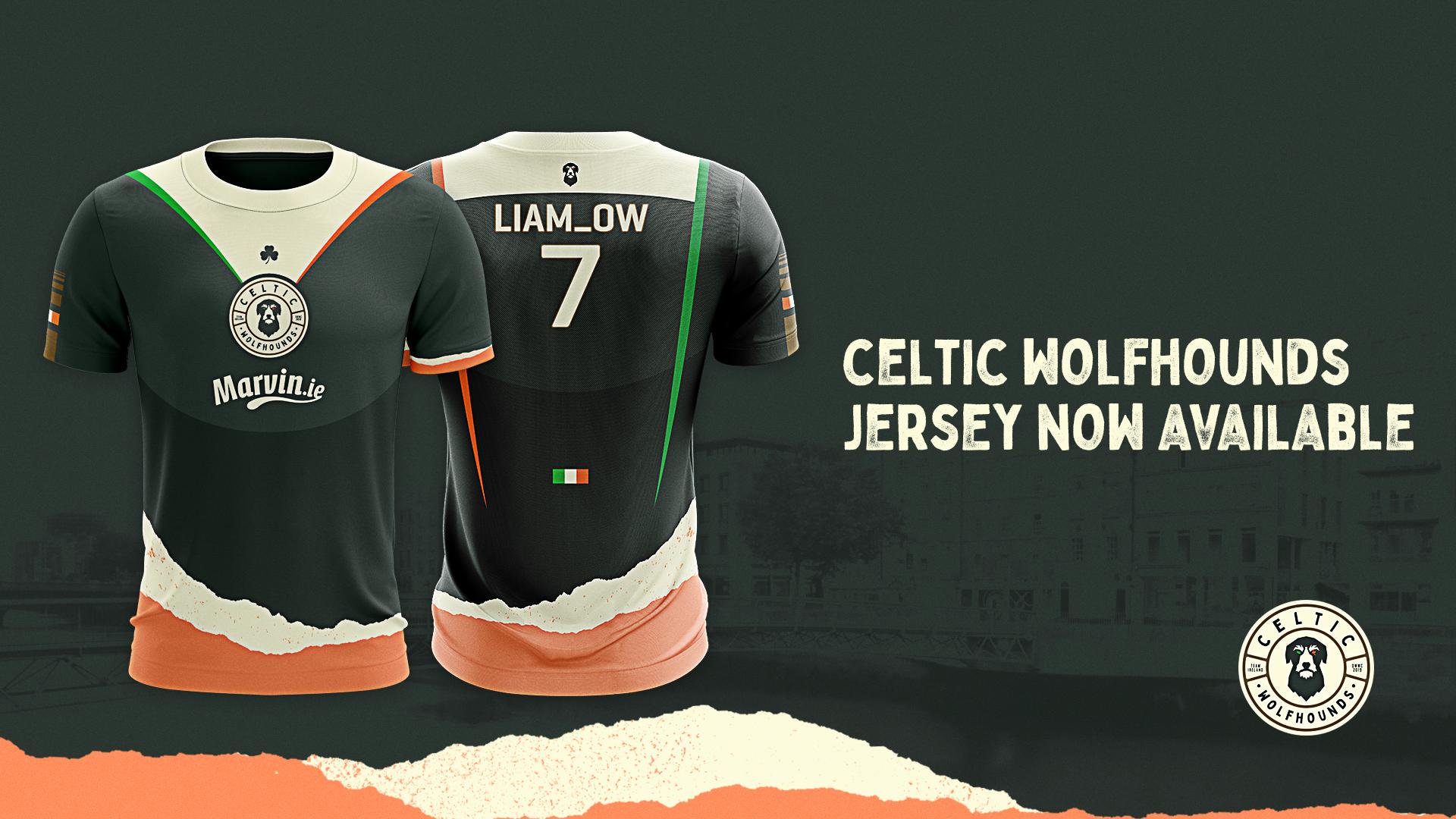 And if you’re looking for a way to support the Wolfhounds on their way to Blizzcon, visit https://www.celticwolfhounds.ie/shop to buy your own customizable Team Ireland jersey. Not only does each purchase go directly to Down Syndrome Ireland, but the jersey was designed by Hanafuda so you’re supporting his work as well.

Hanafuda’s work can be found: