Saturday, August 31, the Celtic Wolfhounds of Team Ireland took on the Trojan Horse of Team Greece in a best-of-7 showmatch. This was the first time the teams had battled each other, although this was neither’s first showmatch. Team Ireland took on Team Austria back in July, and Team Greece is in the midst of the Monkey Bubble EuroCup Fundraiser which sees 18 European-server teams face off in a tournament to raise money for their trips to Blizzcon for the World Cup later this year.
The tournament is streamed on https://www.twitch.tv/mb_official and it will last from 30 August – 8 September.

The starters for Team Ireland were Liam, PureIrish, FlexG, Buckle, M3wts, and Scally, with Wheat and Eoghann on the bench.
Team Greece went with Ilka (their Head Coach playing in for Sezsama at Main Tank), Jobin, Kyuubi, TheCook, Kailor, and McJohn.

The first map of the series was Ilios, starting out on the Ruins stage. Both teams ran Orisa, Sigma, Doomfist, and Moira, four heroes who seem to be staples of this emerging ‘double-barrier’ meta. Orisa and Sigma provide the two barriers which can block an immense amount of damage, so Doomfist is a solid choice to run against it since most of his damage can go through shields. Moira works splendidly as well since her Biotic Orbs and Coalescence pass through barriers, and her healing output is enough to keep the tanks healthy through team fights.

Team Ireland filled out the rest of the team with Mei and Lucio, while Team Greece ran Pharah, Mercy, and Ana. Despite the lack of a hitscan hero on the Irish side to pressure MrCook’s Pharah, the Mei helped to solidify their point presence, allowing Ireland to roll over the grounded members of Greece and not pay too much attention to the ‘Pharmercy.’

The Wolfhounds took the first stage 100-0. Moving to the infamous Well, Greece played the same composition except an Ana instead of Moira in order to pressure FlexG’s Pharah. Ireland swapped to Pharah and McCree for Damage heroes, with Baptiste and Mercy as healers. Greece came out strong initially, taking first control of the point. But Ireland pushed back, flipping the point when Greece had 47% and holding it for the 100-47 victory and took the map win 2-0.

With the loser picking the next map, Greece selected Havana out of the pool of payload maps. Ireland defended first and kept the double-barrier composition with a Pharmercy, Doomfist, and Moira. The Greek attack mirrored the double barriers and Pharmercy, with Kyuubi on Widowmaker and McJohn on Ana.
The Greek attack really felt like a Trojan Horse heading through Point A easily and winning fights towards point B, but FlexG swapped to Mei and was able to freeze their push mere meters from the checkpoint. The Irish attack barely struggled taking point A, but got halted halfway through point B. After a regroup and a mistimed EMP by Greece’s Kyuubi, they were able to push through and complete the point with a Blizzard on the point for good measure, taking the map win, 2-1.

The third map played was hybrid map King’s Row. Team Ireland subbed in Wheat and Eoghann in for FlexG and Buckle at the Damage roles. Greece attacked first and were able to get early picks onto Liam and Eoghann, allowing them to take the first two ticks on Point A easily.
After that Ireland were able to recover in what felt like the longest team fight ever, with alternating contests and picks going both ways.

TheCook threw out his Barrage at the end of the fight, looking to make a big play but ultimately not getting enough to take the point or warrant the usage of that ultimate. This left Ireland in the lead in ultimate economy, but Greece were still able to take Point A with 30 seconds remaining and pushed up aggressively to move the payload as far as possible. Greece won the next fight with a Nanoboost-Barrage combination, allowing them to complete Point C and the map with 11 seconds remaining.

The Irish attack remained patient until Eoghann’s Hanzo was able to pick off TheCook’s Pharah and they took Point A on that first team fight. Moving along at their patient pace, they won the team fights headed to the end of Point B and took it easily after a mismanaged resurrect from the Greek side.
Nearing the end of Point C, a magnificent Halt-Dragonstrike combo took out Jobin, Ilka, and Kyuubi, which left little to contest the Irish onslaught. Ireland completed the map with 2:03 remaining.

Since both teams completed the map, both get a second chance, but Greece start with a mere minute while Ireland get 2:52. The Greek attack stalled out for most of Point A but was able to take it after Kyuubi switched to Symmetra. Ireland used a Dragonstrike, Blizzard, and Gravitic Flux to stop Greece before they finished Point B.

For the Irish attack, M3wts’ Ana and Eoghann’s Hanzo were able to take down TheCook’s Pharah and without that damage, Greece had to give up point A again. The Greek defence held close to Point A effectively but were taken down in overtime. As the payload approached the finish, Eoghann’s Dragonstrike zoned Greece out from being able to contest and Ireland took the map 5-4.

With this being a best-of-7 series, Map 4 was match point for Ireland. The Greek Trojan Horse picked Hanamura as the assault map.

Team Ireland made some substitutions with FlexG and Buckle coming back in for Wheat and Eoghann, while Existence came in to replace Scally. With Ireland defending first, the teams came out with mirrored line-ups of Orisa, Sigma, Pharah, Doomfist, Mercy, and Ana.
Ireland were able to hold Greece for the full four minutes, but Kyuubi’s swap to Tracer allowed them to pull out the point take in overtime.
However, the second point was rougher, and Greece were unable to take a single tick off the Irish defence.

For their own defence, the Greeks held strong for the majority of Point A but ultimately had to give it up when PureIrish stunned TheCook out of his Barrage ultimate, and FlexG was able to take him out in the Pharah duel. Thanks to this, Ireland were able to hold on to most of their ultimates and had a much better economy going into Point B.
Greece thwarted several Irish pushes, but the Wolfhounds came rushing back with a Meteor Strike, Supercharger, Gravitic Flux, and Coalescence and not even TheCook’s Barrage could stop that, letting Ireland take the map 2-1. 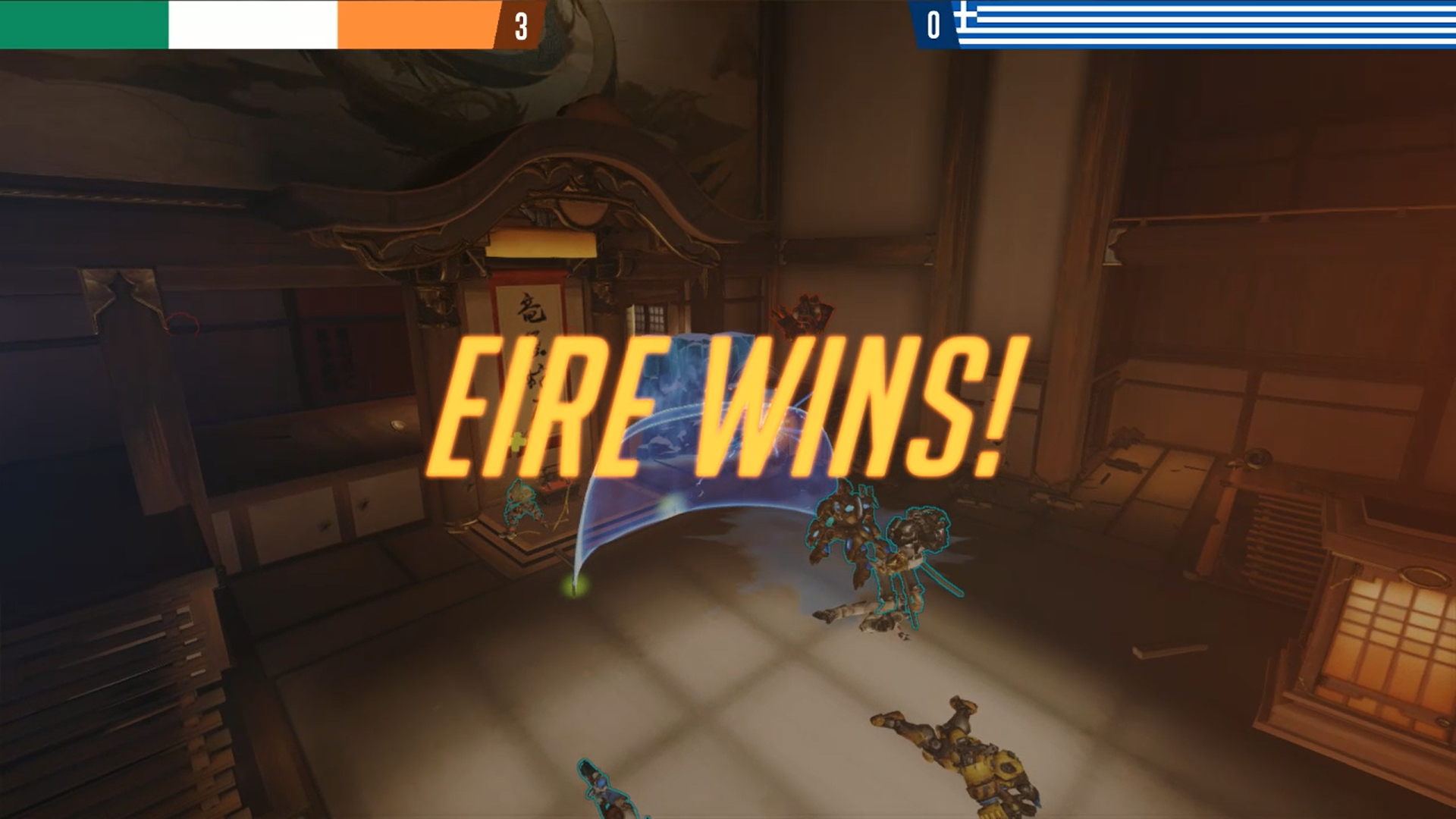 Although the score line of this match appears completely one-sided, there are plenty of takeaways for both teams and some maps were much closer than they appear.

For Greece, many of their fights or holds were really solid but they were plagued by several misplays and hero choices. If they can clean up their ability and ultimate discipline, they can really take advantage of a lot more situations and more fights should go their way. Additionally, TheCook was looking incredible as Pharah and had his Barrage up in just about every team fight, but they struggled as Ireland played point-centric compositions that could take out the rest of Team Greece before the Pharmercy could get enough meaningful damage in.

On the Irish side, there’s a lot of good to take away from this, but also areas that need cleaning up as many of the fights could have gone either way, especially in their overtime push on King’s Row.
It’s good to see their flexibility and adaptable hero pools, with FlexG and Buckle being able to cover all of the necessary Damage heroes, and Scally and M3wts playing really well across the board of Support heroes.
Liam and PureIrish showcased their synergy, utilizing the Halt and Accretion abilities well and putting on a masterclass in shield management. There is still work to be done, but for today they are definitely Making Ireland Proud.